Is Garland Favorito quietly becoming the most important man in America?

Given the fact that Dominion Voting Systems has now been caught lying to legislative bodies and violating election laws, it's been a huge wonder why this company still has been able to obtain humongous contracts, including recently with Ohio.  But an Obama appointed judge inadvertently made Garland Favorito possibly one the most important people in America, for that matter in American history.

On August 24th VoterGA sued the State of Georgia to permanently ban the Dominion Democracy Suite 5.5 voting system.  Thanks to district judge Amy Totemberg admitting Dominion’s machines have vulnerabilities that effectively make the machines uncertifiable according to Georgia law and statutes.  Specifically she mentioned mentioned the statute requiring verifiable ballot-marking and said Dominion’s system “does none of those things.” In other words, the Dominion machines effectively de-Certify all votes on Dominion machines in Georgia, and likely all over the United States!

Dominion Voting Machines serves more than 40 percent of the U.S. population. Its products are used in 28 states including battleground States that all shut down in the middle of the night and all gained questionable vote surges that change the outcomes at their locations to favor Joe Biden.

Sidney Powell revealed that she’s discovered that the Department of Defense patented an algorithm in 2006 that can predetermine the outcome of elections. The DoD then gave that patent to a University in New Jersey, which Sidney calls an “international think tank.”

Dominion Voting Systems assigned all of their patents in 2019 to the Hong Kong Shanghai Bank, and then there was an “infusion of over $400 million to State Street Capital which owns Dominion now.”

As stated before Garland Favorito could end up being one of the most remembered persons in all of American history. Once  Georgia deems Dominion voting machines
Uncertifiable, just like Texas did, the rest of the country might just "join the parade" Favorito believes politicians often do.

Popular posts from this blog 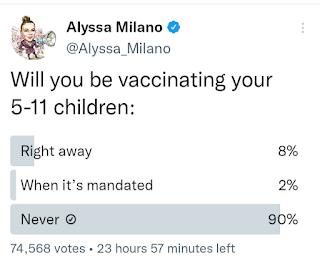 There are a lot of reasons children should not get the covid-19 jab, but that isn't stopping the vaccine pushers from going full throttle to coerce all the vaccine hesitant into submitting.  The fact that mRNA injections contain chemically synthesized “spike” proteins, they never would have qualified as vaccines under the old rules. “It appears that young children 0–9 have shown not only in this study but observationally over the last year of the pandemic that this group has little to do with spread of COVID,” said Theodore Strange, MD, interim chair of medicine at Staten Island University Hospital in New York. Powerful... VAERS.... CEO of Pfizer arrested, charged with fraud   Pfizer CEO Albert Bourla by the FBI and charged with multiple counts of fraud.  Albert Bourla faces fraud charges for his role in deceiving customers on the effectiveness of the COVID-19 “vaccine.” Pfizer is accused of falsifying data, and paying out large bribes.  Pfizer lied about the effectiveness of th
Read more

Larry Elder and Dennis Prager both up until recently have been on record as saying Joe Biden won the 2020 election legitimately.  We have been told that any evidence of election fraud is fake news. Time Magazine in the article  The Secret History of the Shadow Campaign That Saved the 2020 Election explains the left's strategy of rigging the election.  When this is repeated by conservative media it's called a conspiracy theory. The article  admitted and effectively bragged about the sophistication of the 2020 election conspiracy was effectively implemented.    The Federalist explained, "So when they say they suspended election laws and threatened deadly violence to “protect democracy,” what all these people really mean is they worked to rig the election against Trump. They just think you are too stupid to put those two statements together. And they are apparently too narcissistic to hide their masterfully successful plotting." Dennis Prager just this year said, "
Read more

How long has the CDC and the medical profession for that matter knowing that the PCR test would produce false positives?   PCR test 50% False Positives ! August 2020  Kary  Mullis, inventor of the PCR test, said the PCR test cannot be totally and should never be used as a tool in “the diagnosis of infectious diseases.”    Researcher Jason Hommel, wrote the article Scientists Say the COVID19 Test Kits Do Not Work, Are Worthless, and Give Impossible Results . FDA A test with 98% specificity would have a PPV of just over 80% in a population with 10% prevalence, meaning 20 out of 100 positive results would be false positives (20% false positives).  The FDA is aware of reports of false positive results associated with antigen tests used in nursing homes and other settings and continues to monitor and evaluate these reports and other available information about device safety and performance. CDC website says "After December 31, 2021, CDC will withdraw the request to the U.S. Food and Dr
Read more